Stuttgart, Germany – Last year we sampled Oktoberfest during the day [here] and it was a family-friendly atmosphere with beer, dancing on the benches  and singing thrown in for good measure, but what about at night when the adults come out to play?

We made a special trip to Stuttgart in the evening to sample the bright lights and the full beer halls in all their glory and I can honestly tell you….. it ain’t nothin’ like the daytime!!!

We arrived just in time to have some dinner – around 5:30pm and the halls were filled already. Which one do you choose? We tried a couple during the day, but settled on spending our entire evening in the Dinkelacker beer hall. You have to book months in advance to get in the front section by the band, but we were quite happy to go the back of the hall to watch as the party unfolded before us. The tables seat 30-40 people, but sitting isn’t what you’re there for – standing on the long benches is the order of the day…

We ordered our ½ chicken and roll along with the reason for living: BEER! Served in one-litre heavy traditional glass steins called a Mass, they look challenging at first, but after a couple – they don’t appear to be big enough. At €9 per glass it doesn’t take long to burn through your money – but that’s all part of the experience. The waitresses are attentive and never far away.

Considering just how much beer was consumed that night, it’s quite surprising that there wasn’t anyone that we could see falling over drunk – happy and enjoying themselves – yes, but drunk and disorderly – nope! The bands kept everyone singing and dancing with barely any time between the switch over from one to the other. There was many a song that had people jumping up and down on the benches to the point I thought it was going to break, but while they bounced they never broke.

It was a night that will live in our memories for a long, long time. I don’t remember ever having that much fun – I was even dancing on the benches and it’s pretty safe to say I’m rhythmically-challenged. All too soon the night was over – 10 pm the band stopped and all the lights came up – time to go home. We spent time talking to our new-found-friends at the next table for about 45 minutes before we were all ushered outside and went our separate ways. 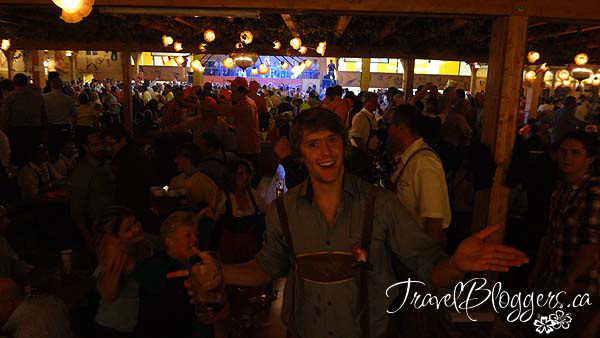 If you have a bucket list – put the Cannstatter-Volksfest in Stuttgart right at the top… and if you don’t have one, start one and make this your first stop – you’ll never regret it. As a heads-up: there is no cost or cover charge to go into any of the beer halls/tents in Stuttgart, but in Munich it’s €10 per beer hall if you end up going all-in for the Oktoberfest experience.

Cannstatter-Volksfest is the second-largest Oktoberfest in the world and usually runs from the last Friday in September to the second Sunday in October each year, 16 days and nights of amusement rides, singing and drinking. Celebrating its 200th anniversary, the 2012 Oktoberfest promised to be a hum-dinger and it didn’t disappoint. The amusement rides range from mild to wild – seriously, some of them are outright terrifying!

Construction of the beer halls starts more than 10 weeks prior to opening day and when you see them it’s impossible to imagine that they aren’t permanent buildings – even the amusement rides look like they are permanent structures!

Practically anything goes, but for an extra layer of fun, consider going Bavarian. For men/boys – a pair of Lederhosen (leather shorts or trousers) start from €120, and for women/girls a traditional Dirndl dress costs about €100 ($135 approx). Tip: When worn correctly, the Dirndls also reveal the wearers’ availability. Look just above the apron: If there’s a bow on the right, she’s taken. A bow on the left means she’s still to be had, and a bow in the middle marks a virgin.

The first Monday in October is usually a German holiday so plenty of people attend during the day. 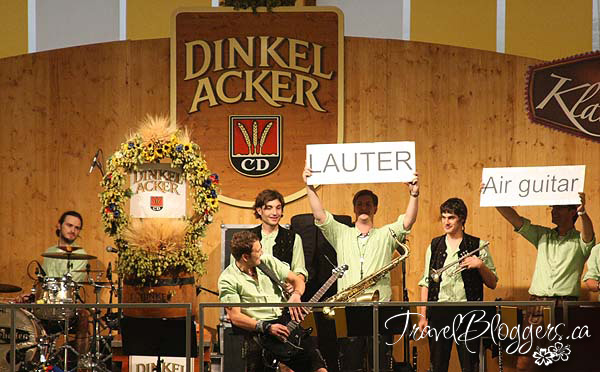 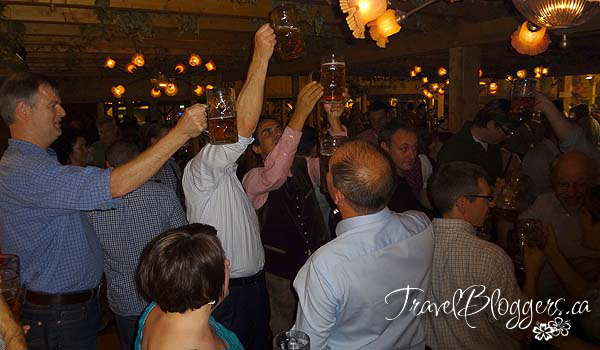 About TravelBloggers.ca
Iain Shankland & Gail Shankland started blogging in order to inspire and motive people to travel the world from their perspective – specializing in having the most fun while using the least amount of money, travelling on the cheap without sacrificing comfort.

This original, copyrighted material may NOT be copied, used in whole or in part in any way, cut and pasted, published or otherwise reproduced in any form or in any medium – which means DO NOT post this on another website or BBS. If you want somebody else to see this, please send them a link or post a link to this page.