I read this today and thought I’d pass it along to our readers. It’s from The Wall Street Journal and it makes me glad I’m not flying this summer! Some of it only applies to flying in the U.S. right now, but some of the changes are happening world-wide. It’s only a matter of time before all the other airlines follow suit so this is eventually going to apply to everyone. Happy travels. 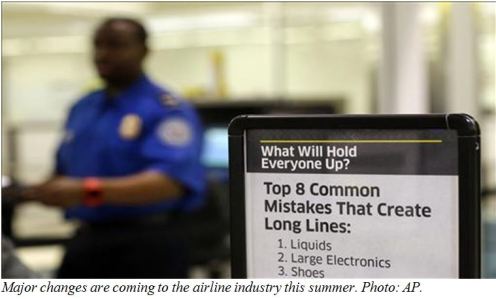 The forecast calls for heavy frustration with a 50% chance of innovation at U.S. airports this summer.

Airport crowds are expected to be the largest in the U.S. since 2008. There’s already concern that budget cuts in Transportation Security Administration overtime will lead to longer security-screening lines. Atlanta’s airport said wait times from an apparent TSA staffing shortage stretched to 70 minutes on a recent Friday, and both the airport and Delta Air Lines are encouraging summer travelers in Atlanta to get to the airport two hours before departure.

Some of the changes may actually help: Travelers will find new boarding procedures at both United and American airlines meant to pack planes faster.

In short, infrequent air travelers will be in for plenty of surprises and ought to prepare. It’s the kind of summer where getting stranded for a couple of days after storm-related cancellations because flights are booked so full seems totally feasible. That means not putting medications in your checked baggage (and never checking valuables), having extra food and necessities for children and carrying some local hotel phone numbers if you’re making a connection.

This portion of the calendar is geared to aggravate travelers even in calmer years. The combination of large crowds and hot-weather thunderstorms that can quickly disrupt flight schedules coast to coast means summertime airline flights typically run later than flights the rest of the year.

On average, 76% of U.S. airline flights arrived within 15 minutes of schedule in June, July and August last year, according to flight-tracking firm FlightStats.com, compared with more than 80% for the rest of the year that avoided being late or canceled.

Southwest Airlines said it would have more spare airplanes this summer to accommodate stuck travelers more quickly. As it has during holiday periods, Southwest plans to routinely keep operating late into the night rather than cancel flights on stormy days.

United Airlines raised its domestic ticket change fee to $200 from $150, and international change fees went to $300 from $250, effective April 18. Delta, American and US Airways quickly followed suit. In other words, anytime you make a change to a non-refundable ticket on those airlines you’ll lose a large portion of the value of the ticket.

That fee burns lots of travelers. Those four airlines collected a total of $2.3 billion in reservation cancellation and change fees last year, according to the Department of Transportation.

United had a terrible summer last year – only 67.9% of flights arrived on-time in summer months, compared with 80.3% the other nine months. Customer complaints soared. The airline blamed computer system problems related to its merger with Continental Airlines and an attempt to schedule planes and crews more tightly.

That effort to get more flying out of planes and crews ended up backfiring – it created longer delays and widespread disruption when tighter schedules couldn’t be met. United had to reverse the move and build more cushion into its schedule.

“We certainly don’t want to repeat last summer,” said Ken Bostock, United’s managing director of airport strategy. United says it is better prepared for summer because it has more staff and better scheduling. In addition, the airline has rolled out new graphics screens for its computer system to make it easier and faster for airport agents to use

United also is introducing out new boarding lanes at gate areas this summer. Five different boarding groups will line up in different areas, akin to how Southwest lines up customers by groups, so that instead of a crush of people pushing toward the gate, each group will have a designated place to wait.

“It takes the scrum away from the front of the boarding area,” Mr. Bostock said.

United will change its boarding Thursday so that after elite-level customers, the rest of the coach cabin will board window-seat passengers first, then middle seats, and aisle seats last. With the “Wilma” system, as United calls it, seats fill faster because people already seated don’t have to get up as much to let a row mate in. United used to use Wilma, but dropped it to help smooth the Continental merger.

United says Wilma boarding is about 20% faster than boarding from the rear of the plane to the front. (Family members traveling together all get the lowest boarding number among the group.)

If you typically reserve a seat in the back of the plane to get earlier boarding and more availability of overhead bin space, you might now want to reserve a window seat on United.

American has its own new change in boarding that may cause fliers to rethink their travel strategies. American joined Alaska Airlines in offering early boarding to customers who don’t have large carry-on bags. American offers Group 2 boarding, right after elite-level frequent fliers, to passengers without overhead-bin luggage.

American tested the idea in seven cities earlier this year and found getting people without overhead bin luggage on early sped up boarding time and improved on-time arrival performance. The policy spread world-wide May 16.

Passenger flow may not be so smooth at TSA checkpoints. The agency says it has dealt with the federal government’s across-the-board sequestration budget cuts by reducing scheduled overtime and it hasn’t furloughed any screeners. Still, the agency is advising travelers to allow more time for longer lines.

One bright spot: TSA has opened its PreCheck program to international flights, giving expedited screening to trusted travelers enrolled in the program for overseas trips. And PreCheck members flying on United, Delta and US Airways will see notification of PreCheck clearance on boarding passes now.

Before you get to the airport and those long TSA lines, here are some more tips to make summer travel smoother:

• Have a backup plan for alternate flights if you are going to an essential event like a cruise or wedding and haven’t built in extra time. Some people book refundable backup tickets or discounted tickets on an airline like Southwest that doesn’t charge a change fee, so the fare can be used for a later flight. But don’t forget to cancel the reservation, because Southwest now charges a no-show fee.

• Use airline Smartphone apps. You can get information about delays and changes faster and sometimes even rebook yourself from your phone. If you get your boarding pass on your phone, some airlines can update it if your seat or flight changes so you don’t have to stand in line at a kiosk or counter.

• Give your phone number to your airline. Carriers have gotten better about calling or texting when problems arise and proactively reaching out to rebook. But they can’t find you if you don’t give them your number.

• Be aware that small knives are still prohibited by TSA—the planned relaxation of the ban on pocketknives has been postponed after flight-attendant protests. If you’re going camping, put the Swiss Army knife in a checked bag.

This original, copyrighted material may NOT be copied, used in whole or in part in any way, cut and pasted, published or otherwise reproduced in any form or in any medium – which means DO NOT POST THIS ON ANOTHER WEBSITE or BLOG. If you want somebody else to see this, please send them a link or post a link to this page.